Glory of the Church: UNITY IN DIVERSITY (Part 3)

This post is the third in a 3-part series focusing on the purpose, mission and glory of the church. 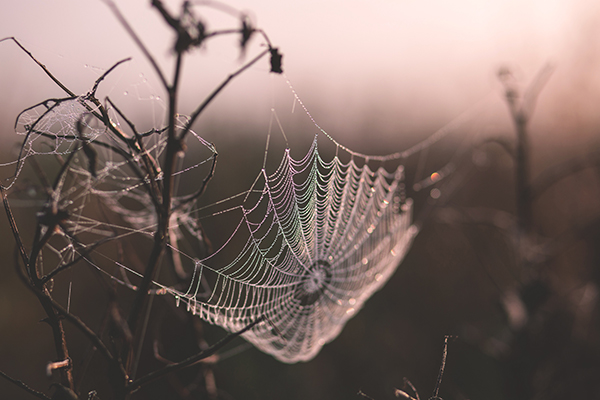 The Glory of the Church: UNITY IN DIVERSITY

Well, webs, actually. You’re familiar with them, yes? Sticky. Catch flies. When you walk into one you look like a crazy person. But for the most part, spider webs and cobwebs are probably not something you’ve given too much thought about. They’re pretty normal; nothing extraordinary about them. Maybe that is how you feel and for the most part that’s how I’ve felt too. If I see a web in my house, I get out the “webby” to get rid of it. If I see one in the yard, I might just spray it down with a hose. Except for this one time...

One evening, this past summer my wife and I noticed this spider, just outside our back door, working to make his web. Later (with a little help from Google) we figured out that he was an Orb Weaver, a spider whose web and its design is considered an engineering feat. Rebecca and I just stood there watching him do his work for at least five minutes. It was fascinating! And we kept returning to check on his progress. When he was done, this thing, this web of his, was an intricately patterned work of beauty. I know it sounds weird, talking about an ordinary web in this way, but in those moments, and even now, because we had the eyes to see it, that web brought glory to God and also gave us great joy.

The point of this post is to answer: where is the glory in the church? Maybe for you, going to church sounds about as exciting and attractive as a cob-web. And you figure, you might as well just swat it away since you figure you can praise God on your own, and can grow and share Jesus without some organized gathering. But I want to show you that there is glory found in the church that bewilderingly beautiful, even if sometimes it gets mistake for a common web.

In the Apostle Paul’s letter to the church in Ephesus, he writes, “so that through the church the manifold wisdom of God might now be made known to the rulers and authorities in the heavenly places.” - Ephesians 3:10

Simply put: through the church, the manifold wisdom of God is made known to the world. However, the term “manifold wisdom” doesn’t just leap off the page for us, so what are we talking about? The term manifold can mean multifaceted (like a brilliant diamond), multicolored (like a bouquet of diverse flowers) or even intricately patterned (like a orb-weaver’s web). Paul is saying that God’s wisdom is an intricately woven, multifaceted glorious work of beauty and it is being shown through the church. But that should make us wonder, “how?”

No, really, it is. Leading up to verse 10, Paul specifically uses the word “mystery” four different times. It is this mystery that brings about the primary way God is being glorified through the church:

This mystery is that the Gentiles are fellow heirs, members of the same body, and partakers of the promise in Christ Jesus through the gospel. - Ephesians 3:6

The mystery was that through faith in the gospel, there could be complete and total equality among people who had previously had giant barriers between them. But God doesn’t just bring down the barriers and turn people into friends or allies, God makes them ONE; a whole new group of people – called the church. And as the church displays a radical new type of unity, in Christ, the manifold wisdom of God is shown, because of how different they all are. The church shines through unity in diversity.

This makes the church far different from any of our futuristic movies with utopian societies, where their great unity is kept by crushing diversity, banning emotion, and making everyone wear the same white tracksuit. God’s desire was to be specially glorified in the church through unity among a diverse people – and it would shine more brightly because they are so different from each other. 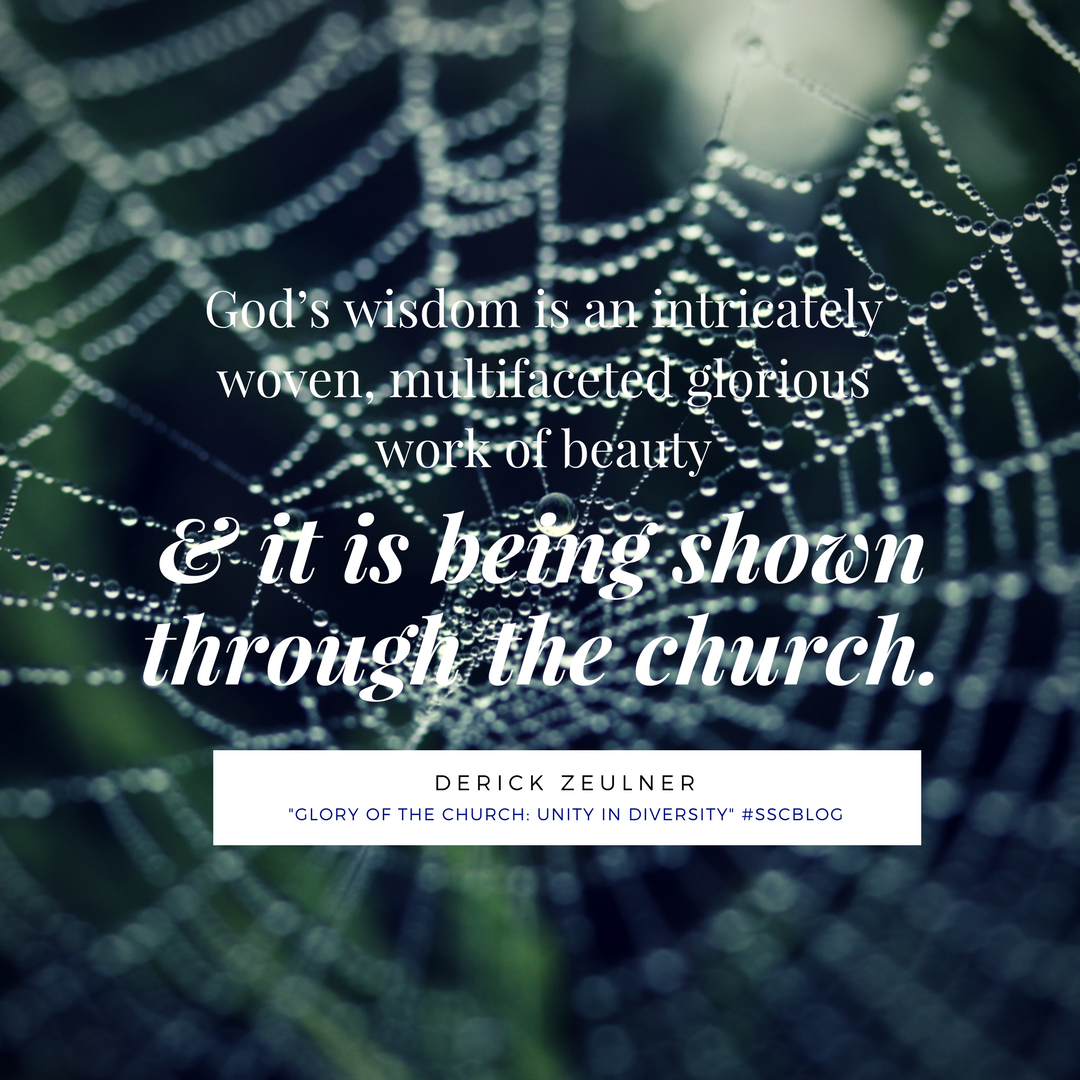 Some Kind of Different

But what kind of diversity are we talking about? Within the context of Ephesians, we know that Paul’s focus is on the racial/cultural diversity of Jews and Gentiles, a very unique and theologically significant divergence. But that is not the only barrier the gospel overcomes to create a beautifully diverse body within the church:

The gospel overcomes not only culture, but also socioeconomic status, social status and gender. Elsewhere Paul speaks to vast differences in age[1], abilities, and gifts,[2] which is not to mention the different experiences and even sins that we all bring to the table.

The church is made up of different people that God loves and now, as brothers and sisters united in Christ, we get to not only love God together, but love each other too. People that the world says should not even like each other, meet together every Sunday in churches across the world. They serve each other, they befriend each other, and in doing so they show the manifold wisdom of God to the world! Now, I recognize that on the face of it, this may not impress you. For you, it’s still a web – not a moment of glory. I mean, maybe you have felt that if there was some more WOW in the weekend service, then it might be worthwhile.

Two months ago, I took my family to Sea World. We saw orcas, penguins, and sharks, but probably the most exciting show was the dolphins. As we were watching, the biggest “wows,” “oohs,” and “ahs” from the crowd (and us) came during the leaps and flips. However, there was this break in the action when the dolphins were having these quiet moments with their trainers, and the trainer/announcer took a little time to point out that for them, this is what it was all about: their relationships with the dolphins.

We all thought the glory of the show was in the spiraling backward somersault, but the trainers saw a greater glory in these friendships. Well, who are you going to trust, the crowd, who goes every few years to be wowed, or the person who is there day in and day out, for years or even decades, still enamored with what they get to be a part of? In the same way, when it comes to the church, the glory of it isn’t in terms of what you are going to do or see, but is in terms of who you are going to know, serve and love.  That is why Jesus said:

By this all people will know that you are my disciples, if you have love for one another. - John 13:35

I in them and you in me, that they may become perfectly one, so that the world may know that you sent me and loved them even as you loved me.  - John 17:23

That’s the glory of the church! That’s our message to the world! The church shines through unity in diversity. When the church is made up of all sorts of different types of people (rich, poor, dark skin, light skin, old, young, coffee fans and tea drinkers), brought together in Christ, it sings to the world of the good news of Jesus! Which means that we are supposed to display the gospel together in a way that we cannot do on our own. It takes work, but its results are glorious. 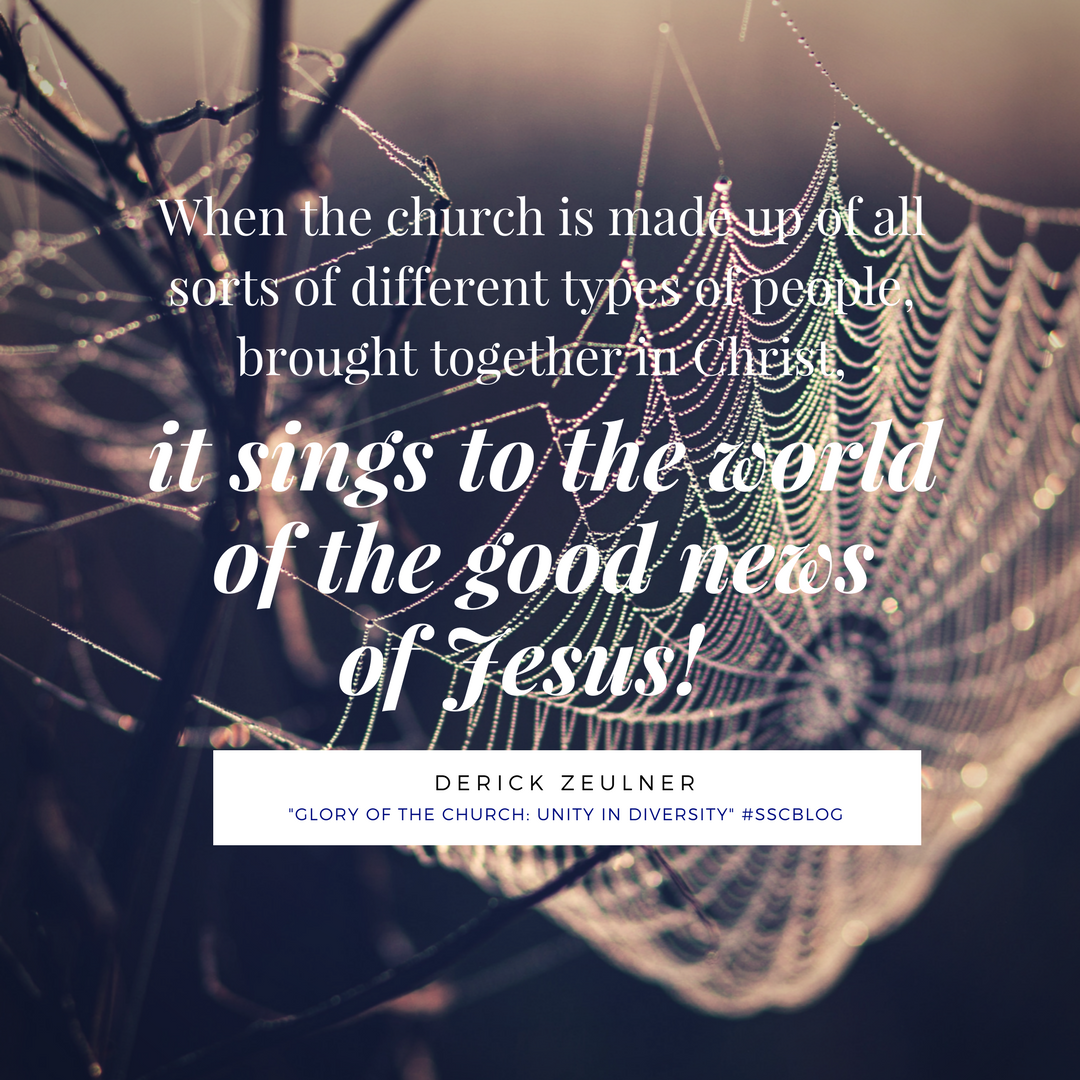 From Iran to in Christ’s Web

Mike and Ellie Nadri are a great example of this truth in our own church. In fact, please watch him tell his story:

Did you catch all the different names and types of people God used to reach this couple? Jacquie welcomed them warmly. Dottie Cole introduced them to the pastor and helped teach them the Bible. They joined a small group, they got baptized, they serve on a team of volunteers. They are connected to the web of this church – a web that includes caucasian widows in their 90s, Hispanic former gang bangers, retired military, teenage boys, single dads, corporate CEOS, preschool moms and two former nominal Muslims from Iran – all people who would normally never have a reason to know each other, now intentionally love each other, help each other and worship God together. 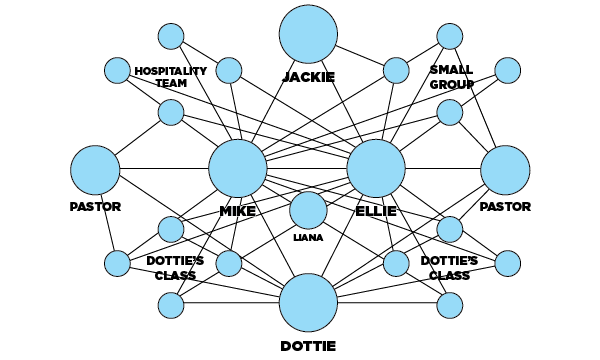 And the same way the ornate design of the orb-weaver’s web points us to the Creator who put that design in the spider’s mind, so too the interconnected relationships of love that are built up in the local church give glory to the One who died to establish it. It displays the bright light of our Savior because He is the only One who can make us ONE. May you find the church not only to be the place you need to be, but also a place where you will see the great glory of God, and as you see it, find great joy in who He has gathered together.

The church exists to MAGNIFY and MULTIPLY. The church shines through UNITY IN DIVERSITY

I’ve always liked spider webs. Now when I see them I’ll be thinking of the church. Thank you .

Resources for "The Talk"(s)

Praying on the Way

A Bigger Story, A Better Hero

What God Wants Teens to Understand about Social Media

"Jesus said It, but It Doesn't Work"

Far As the Curse Is Found

Why Do We Sing?

How Do I Lead Someone to Christ?

One Step Forward at a Time

What Can I Do?

Getting Moving Again (in Evangelism)

Jesus Works Through Us (All 6 Videos)

The Center of All Things

Graduates: Jesus Is Worth More

ICYMI: "Guts of a Godly Man"

Glory of the Church: UNITY IN DIVERSITY (Part 3)

Mission of the Church: MULTIPLY (Part 2)

Purpose of the Church: MAGNIFY (Part 1)

Easter Is Over... Now What?

How to Pray When Life Falls Apart

Praying Past Our Preferred Outcomes

Help for the Fight

What About the Reformation?

Looking into "the Depths" of Anxiety

I Trust God, but what if I'm Still Anxious?

Jesus and the Journey to Joy

Backpack Drive 2017: The Results Are In!

How to Embrace Rest When Work Never Ends

Meeting God in the Psalms

Why the Evening Service is Ending

First Week of All Church in San Juan

20 Resolutions for Your Tongue

Handbook for an Active Faith

Christmas at the Shores

Christmas at the Shores

You did it again! #YMCABACKPACKS

Read the Bible in a Year

Christmas at the Shores 2014

No Better Time Than Now