Forgiveness: Jesus' Grace in the Heart of an Abuse Survivor

With all of Jesus’ teachings, we should wrestle with how his words are played out in people’s lives with different backgrounds and situations.  A challenge in preaching any sermon is giving these various situations sufficient attention.  This blog is one way we attempt to provide the space to extend the conversation to broaden our perspective.  In response to my message on forgiveness this past Sunday, a fellow worshiper from our church has written to provide us much needed insight on forgiveness from her own life.  My hope is that her story brings encouragement, conviction, and broadens your ability to graciously journey along with other Christ followers as it has for me. 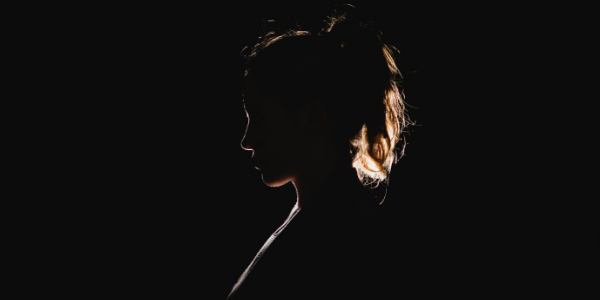 Last Sunday Pastor Micah preached on forgiveness and reminded us that as Christians we forgive because we have been forgiven in Christ. He pumped what appeared to be pesticide into a cup, swirled, smelled, and swallowed it as a powerful illustration of Joanna Weaver’s adage:

Bitterness is like drinking poison and imagining the other person will die.

But what if you’ve been hurt so badly the poison doesn’t seem so harmful in comparison? Jesus’ command to forgive is difficult, but for sisters and brothers who have experienced sexual, physical, or emotional abuse, the command to forgive sounds unfathomable. If you’ve been abused, refusing to forgive the offender often seems like the one ability that has not been completely torn from you. As a survivor myself, the admonishment to forgive my abuser because Jesus forgave me was at first incomprehensible; I told Jesus that I had never done anything like what my abuser had done to me and He was simply asking too much. 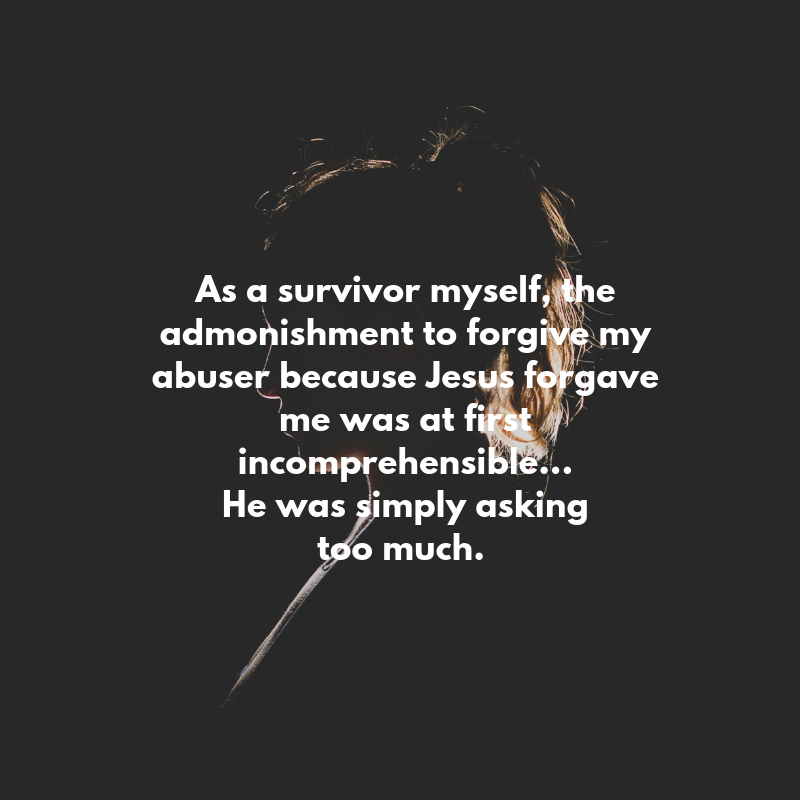 Sometimes I imagine sitting in front of Jesus and talking to Him. It helps me remember that He was a person who breathed, whose eyes would have met mine, whose touch would have brought healing. What would He say to me, His beloved child who was violated? I don’t think He would quickly demand that I forgive my abuser. I don’t think he would immediately remind me how much I had sinned or explain to me that all sin is offensive. Instead, I imagine that He would respond to me the way He responded to the woman who brushed his garment hoping to be healed. This woman was bleeding for 12 years and in an act of faith got close to Jesus and touched His robe. He said to her:

“Daughter, your faith has made you well; go in peace, and be healed of your disease.” (Mark 5:34)

This woman was not an abuse survivor, but since she continually bled, she would have been cast out from her community and shamed, the same way many abuse survivors feel. No one would have touched her—and touching the man people thought might be the Messiah would definitely be prohibited. But Jesus wasn’t disgusted with her; He didn’t malign her actions. Instead, Jesus treated her with dignity and love, and blessed her with peace. This is the Jesus I imagine sitting in front of abuse survivors. See Him now sitting in front of you; the Jesus who treats the ashamed with unbridled compassion and grace. I think Jesus would begin by telling an abuse survivor how treasured and loved they are, rather than telling them how sinful they are.

However, the difficult command remains despite any of our experiences: to forgive our sisters and brothers “seventy-seven times” (Matthew 18:22). If it’s hard to be motivated to forgive by remembering how much we ourselves have sinned, is there any hope that we can honor God through forgiving our abusers?  I believe the answer to that is, “Absolutely yes!”

Pastor Micah introduced Dr. Everett Worthington’s acronym for walking through forgiveness: REACH. The first step, “Recall,” was important for me when I decided I wanted to forgive my abuser. I knew that in order to forgive, I had to remember the hurt and acknowledge what had been taken from me. If I didn’t, I would have risked suppressing harmful emotions which would only resurface later. I took time to grieve, not reveling in the pain, but recognizing it so it could no longer torture me.

As I began to realize how much pain I was in, I looked to the only person who could provide me comfort: Jesus. I knew He commanded me to forgive, but I needed to understand why. My counselor reminded me of this scripture:

“Do not take revenge, my dear friends, but leave room for God’s wrath, for it is written: “It is mine to avenge, I will repay,” says the Lord. (Romans 12:19)

Hear the tenderness in Paul’s voice as he calls the church members “dear friends.” The call to let God avenge is a loving one, one that sets us free from the burden of seeking justice for ourselves. I first refused to forgive because I didn’t trust that Jesus loved me enough to execute justice for me. The Spirit helped me recognize that I was giving myself a task too big—a job only God could do.

I imagined that holding anger in my heart would punish my abuser. In reality, my anger only held me captive, and had no effect on the other person (much like the poison of the beginning quote). Many times, the people who hurt us don’t ask for forgiveness; my abuser certainly wasn’t going to ask for mine. But I learned that forgiveness is not always about the offender. It’s about releasing the offense, so that I can be free from the shackles that unforgiveness locks around my heart. Through God’s grace, I asked Him to help me forgive my abuser, so that I could be free.

My journey to forgiveness took years. I sought help, went to counseling, and invested time to understand what it really meant. It was a lengthy process, but one in which I was never alone. Rather than trying to forgive out of sheer will, with every movement I was supported by the radical grace of Jesus, His guiding love, and His ever-present peace. 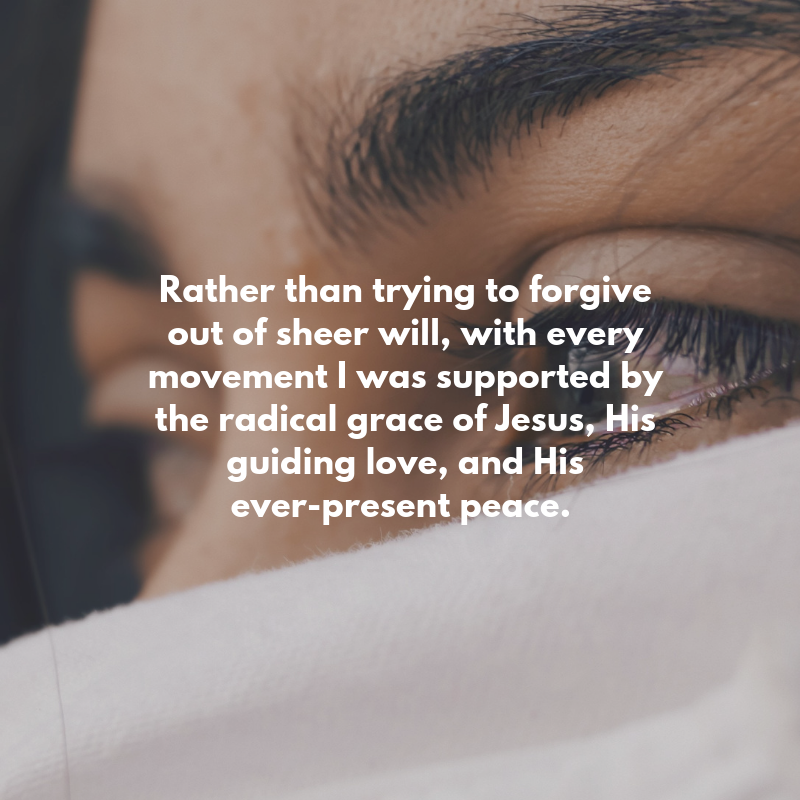 Knowing that forgiveness can be a long process, let’s talk about the scary verse at the end of the passage from Sunday’s sermon. Jesus tells His disciples that if we don’t forgive, we will be treated just like the servant who did not forgive his debtor and was thrown in jail. Jesus says, “so also my Heavenly Father will do to every one of you, if you do not forgive your brother from your heart.” (Matthew 18:34-35).

Does this verse mean that if I have a difficult time forgiving my abuser that Jesus won’t forgive me? I don’t think so. Having a difficult time forgiving or enduring a long painful process of a healing journey are not the same as the unforgiving heart portrayed in the scriptures. Jesus does a radical work in the hearts of those who trust Him as He creates forgiving hearts through His gracious forgiveness. But that doesn’t mean it happens all at once. Jesus is pleased to take us on a journey, a journey where we learn to fix our eyes on Jesus instead of our pain. A journey where we begin to accept the freedom and healing found in the forgiveness He offers us. And as Jesus leads us to finally forgive, we get to drop the heavy baggage in our hands to hold His hand instead.

Becoming like Christ is our goal, and while the difficult act of forgiveness is key in following Him, Jesus is ready to walk with us through each step of healing to help get us there. 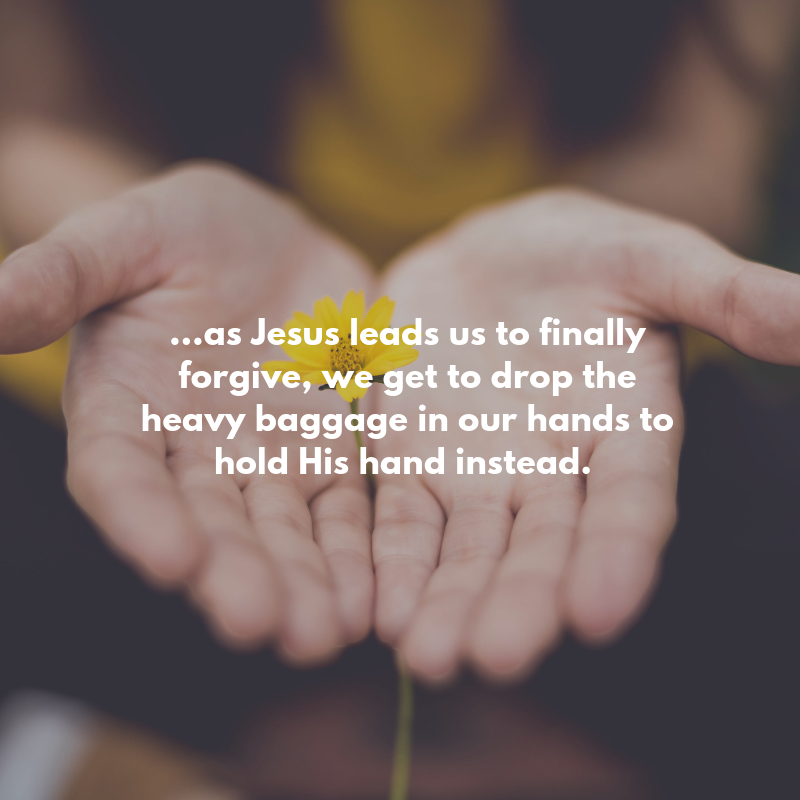 As a post-script, know that while Jesus often calls us to reconcile ourselves to those who have hurt us, He certainly does not expect this from us in cases of abuse. The Lord wants you to ask for help, remove yourself from an abusive situation, and keep yourself away from it because He loves you.

If you haven’t been abused, you probably know someone who has. If they share their experience with you, listen to them, believe them, love them. Encourage them to seek help, and walk with them as they try to honor Jesus.

Praying for and loving on Nancy and her friend. Also, all those in our church family who are working on forgiveness projects.

What a timely message that I regret I wasn't present to hear. I visited with a deeply wounded fellow Christian yesterday. She has suffered at the hands of Christians in her church who emotionally, socially shamed and wrongfully exiled her from her Christian family that she had been faithfully serving. She is so angry and bitter at this point, all I could do is listen and love her in her pain. I will pass on this to her as she continues to cry out to Jesus for comfort in this storm. Thank you so much for sharing this as it is very practical and where the rubber meets the road!